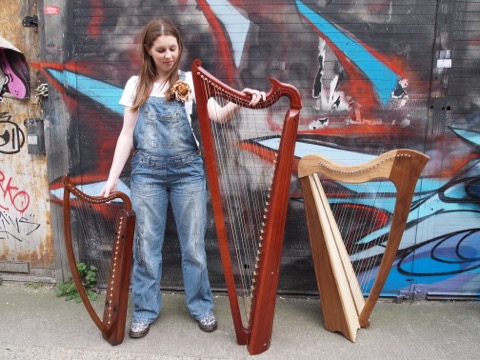 Cat is a player of medieval, Gothic, triple, lever and electro harps and of recorders, a singer, a musical director and a writer on music. She is Director of Music at Fitzwilliam College, Cambridge.

As an instrumentalist, she is at her happiest in the theatre or the opera pit. In theatre, Cat has worked for the Royal Shakespeare Company (including on its extended 2014 West End run of the Hilary Mantel adaptations Wolf Hall/Bring Up The Bodies) and for Shakespeare’s Globe Theatre. She has a particular interest in directing improvised live-scoring of theatrical work, and has worked in this capacity on shows ranging from Viking sagas to Greek tragedy, from ancient Sumerian epic to Lope de Vega. She has played in opera pits all over the UK in France in contexts ranging from continuo triple harp in a great many of Monteverdi’s and Cavalli’s staged works, via High Baroque opera obbligatos and Britten’s on-stage parts in A Midsummer Night’s Dream and Noye’s Fludde, to contemporary minstrelsy in the world première run of Louis Mander’s Beowulf. Cat also enjoys film and TV work, appearing recently with various harps in programmes as diverse as Dan Jones/Suzannah Lipscomb’s Channel 5 documentary on Henry VIII and his wives, the BAFTA-nominated Queen Elizabeth’s Secret Agents on BBC 2, and a BBC 1 Christmas special on Danny Dyer of Eastenders fame. She loves working with percussionists in a duo context and particularly enjoys playing with percussionist Rosie Bergonzi and with tabla player Deepak Venkateshvaran. As a singer, she undertakes work with a medieval, folk or theatrical bent (she has particularly enjoyed touring and recording in Morocco with Sufi Islamic musicians and British ensemble Passamezzo) as well as liturgical choral work.

As Director of Music at Fitzwilliam College, Cambridge Cat oversees all practical music-making in the College, from visiting professional recitals by artists as diverse as Anne Denholm, harpist to HRH the Prince of Wales, and Persian duo Nasim-e Tarab to the many fascinating concerts put on by the student body, which is particularly strong in a cappella singing and in chamber music. She composes, arranges, and coaches for the student body and directs, along with the organ scholar(s), the Chapel Choir. Cat also supervises for the Music Faculty at Cambridge and particularly relishes admitting and teaching first-year undergraduates, enjoying adapting her teaching to the differing backgrounds of incoming students. She has particular teaching interests in the parallels between early and contemporary improvisation, and enjoys coupling this teaching interest with her interest in outreach teaching for Goldsmiths, University of London.

Cat read Music at Oxford University and then undertook postgraduate study in historical performance at the Guildhall School of Music and Drama and the Royal Academy of Music. She plays a small medieval harp by Alice Margerum, a late Gothic/Renaissance harp and an Italianate triple harp by Simon Capp, a lever harp by Telynau Teifi and a blue Camac electro-harp. Her baroque recorders are mostly by Martin Wenner and her medieval/Renaissance recorders are by a variety of makers.